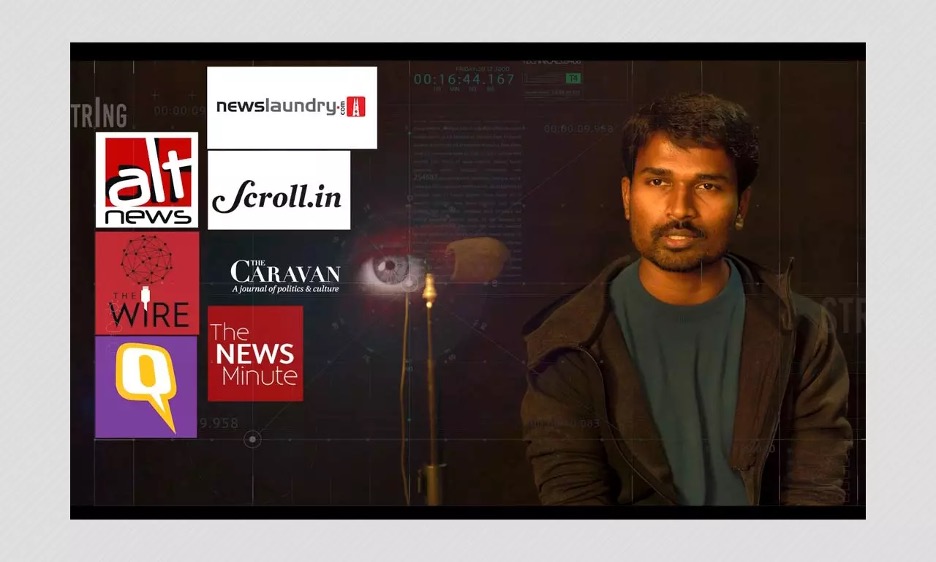 In an explosive and a viral video on a popular YouTube channel, “The String”, the host Vinodh Kumar made a series of sensational claims revealing the links between the foreign vested interests and a set of Indian media and alleged propaganda websites. The video was expunged by YouTube soon enough sparkling a national debate on social media and the mainstream media.

In an explosive and a viral video on a popular YouTube channel, “The String” with around 4 lakh subscribers, the host Vinodh Kumar made a series of scandalous claims unravelling the links between the foreign vested interests and a set of Indian media and alleged propaganda websites. The video was removed by YouTube soon enough sparkling a national debate on social media and the mainstream media. In the 12-minute-long video of “The String”, severe allegations were made upon several media houses and journalists’ involved in the purported conspiracy behind the ongoing Farmer’s protest around the Delhi borders. The video also shed light on an association called DIGIPUB, an association of media entities like The Wire, The Quint, The News Minute, Alt News, Scroll, etc and how these media entities and the journalists associated with it found mention in Greta’s ‘tool kit’ that had details, point by point on how to carry out the vile and poignant propaganda against India, whom to tag in the social media posts and other such minute details. The video also exposes how a foreign individual named Annalisa Merelli has endorsed these media outlets to channel funds to them a few days before Greta Thunberg shared the tool. Soon after the video release, it got viral and amassed over 1.5 lakh views in just a few hours.

“We put up the video from our social media accounts including YouTube channel with distinct ‘evidences’ joining various dots from after an in-depth research that our team does and still the video was reported and has been taken off” says Kumar while expressing his melancholy. The String had also highlighted how George Soros had been indirectly influencing India’s political affairs by funding a few left websites/media houses. Vinodh had also highlighted how these websites were mentioned in the Greta Thunberg ‘Toolkit’, the documents inadvertently shared by Greta Thunberg that exposes that the foreign conspiracy against India. “The video however was mass reported by those who have been unveiled and exposed badly by us and that we are now looking for all possible legal options”, said one member of the channel on condition of anonymity. The String has also appealed the YouTube headquarters demanding a detailed clarification for removing the video.