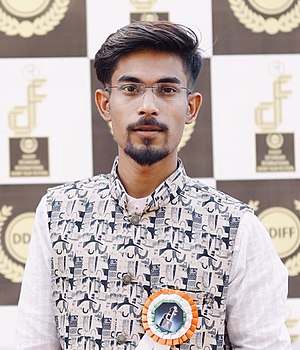 Drenched in fame and love for his debut novel ‘Saajna Re: A Life-Long Journey Of Finding Her,’ Vaibhav Palhade is all set to release his next book on August 25th, 2020.

‘Hidden Hand,’ a romantic novel, dwells in a mysterious vibe. The book cover suggests something unusual amidst a love story, maybe a tale of love and mystery. This novel has a secret; you only unveil after you read it.

‘Hidden Hand’ novel is Vaibhav Palhade’s second quarantine creation. His first book, ‘Saajna Re’ became widely popular among romance novel fanatics. The book was translated into multiple languages and was available for readers worldwide. Vaibhav released his brand new novel’s poster on his social media handles and left his fans to linger in suspense.

Vaibhav’s new-found success as a writer probably roots to his screenplay writing skills. He, in fact, is a famous Marathi film-maker and has made many short films in his career that started when he was 14. Professionally, he is a director, editor, and writer. Some of his best works are in his thriller short films that are loved by his fans.

The pandemic lockdown had different impacts on different people- but Vaibhav chose to make the best of it. He honed his skills as a writer and brought literary masterpieces to the table for his fans. His first book earned him global recognition and was appreciated by many. His unique style of writing made his novel stand apart. An easy-to-read and comprehensive language with an enrapturing story-line made his book a magical experience for the readers.

Vaibhav Palhade comes from a humble background with no roots in the entertainment industry. He made his way to the apex of the Marathi film industry and is soon going to pursue Bollywood as well. A perfect package of talent, intellect, and charm has made this young man a youth icon. With his relentless hard-work and fans’ support, he is all set to give us another outstanding novel to obsess over.

‘When life gives you lemons, make lemonade’- this is exactly how Vaibhav Palhade did with his lockdown period. Making the world obsess over his debut novel ‘Saanjna Re: A Life-Long Of Finding Her’, he is all set to launch his latest creation- ‘Hidden Hand’ on August 25th, 2020

As the name suggests, this book will be quite interesting to read. The sense of mystery in a love story is vividly communicated through the book cover. The theme of this book seems very unusual and intriguing. The secret of ‘Hidden Hand’ is definitely going to be a novel that will captivate readers and make them fall in love.

Paras Gola is a Delhi-based entrepreneur, influencer, digital marketer, Blogger And founder of YNB Digital Media has started blogging at the young age of 16, he learned various blog related strategies, tactics and became a successful bloggers And digital marketing expert.