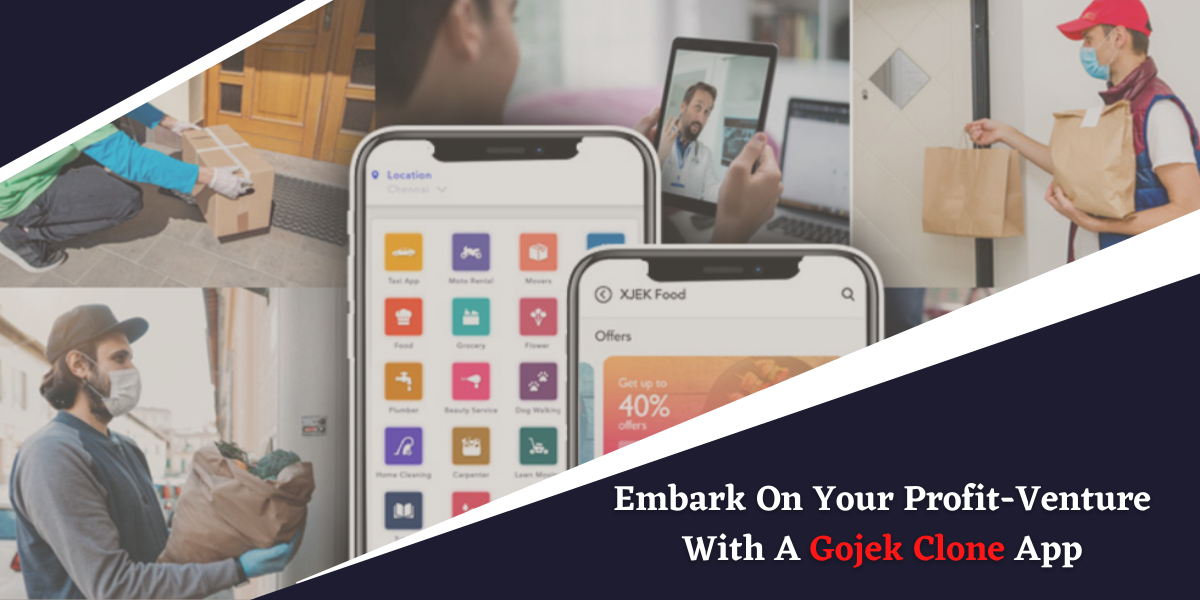 Super applications or super apps as they are commonly abbreviated can be considered the Swiss Army knives of the mobile app world. They provide multiple utilities within a single app. For a considerable stretch of time ever since the concept of mobile applications, a super app was considered a figment of the imagination. This is probably one of the reasons why we do not see a lot of American/European mobile app development companies get into these super apps.

However, that is not the case with the Asian and especially, the South East Asian markets. WeChat is one of the most prominent super apps from China. In India as well, there are apps like PayTM and MyJio. While there may be different apps spread across the globe, the numero Uno example of super apps is Gojek.

A bit about Gojek

Gojek is a super app from Indonesia, which can be considered one of the oddest countries to have such a technological innovation. The name of the app can be attributed to the homophone Ojek, which is a name given to bike taxis in Indonesia.

Gojek started off as a simple call-center facilitating connections between a person who requests a ride and a person who wants to provide the bike taxi service. With time, it evolved to become an app that facilitates ride-hailing services with both cars and bikes.

Today, Gojek offers more than 50 different services spread across a wide spectrum. The areas which Gojek covers include, but are not limited to transportation, food and grocery delivery, household services like handyman, car washing, and plumbing, massage and beauty services, financial services, and even fuel delivery.

The company is now valued at a staggering $5 billion, and what makes the business idea and the company more attractive and lucrative is the formidable portfolio of investors that Gojek can boast of. The companies that have invested in Gojek include names like Sequoia Capital, Google, Facebook, PayPal, Tencent, and Visa.

The impact of Gojek

It would not be an exaggeration to say that the impact of Gojek on the Indonesian economy has been immensely positive. Gojek has ended up not only increasing the GDP of Indonesia to a considerable extent, but it has also positively influenced the average daily income of an Indonesian citizen.

Gojek has expanded its operations in almost all Southeast Asian countries including but not limited to Thailand, the Philippines, Laos, Vietnam, and Cambodia. It has started its overseas operations by opening a development center in the city of Bangalore in India.

The question of whether or not a super app will be a viable business option has been fittingly and conclusively answered in the success of Gojek. This has prompted a lot of aspiring entrepreneurs even in western countries to look at the prospect of making a business out of a Gojek-like app.

One of the most evident advantages of a super app is that customers do not have to go to different applications to avail of different services. While this one is a great advantage in itself, there are a lot more of them, some on the surface and some under the hood.

One of the advantages that came to the forefront during the COVID-19 pandemic is that a super app has multiple streams of revenue. Even if one of them fails, the other will rightly compensate. Let us take 2020 for example. The coronavirus and the imposed travel restrictions meant that any transportation-based business would not thrive. While the bike and car taxi wing of Gojek suffered a lot, it was rightly compensated by the food and grocery delivery services that witnessed an unprecedented boom during the lockdown.

If the super app were to introduce a new utility, it makes the entire process of onboarding simple and easy. Instead of starting with zero users, the super app can afford to start with an already available audience.

The advantage does not only stop with the onboarding of users but even in including the utility itself. More often than not, a super app business does not aggressively pursue app development. There are a network of developers who constantly keep developing mini-applications that can seamlessly integrate into the ecosystem like Gojek. This would mean that the app developer earns easy revenue and the super app company gets to provide a new service without much effort.

Above everything, the biggest advantage that a super app presents is the richness of data. When you have data from multiple streams, it becomes easy to profile the user and provide AI-based recommendations. In addition, the richness of data comes in handy when providing financial services. If a user requests a loan, it becomes easy to disburse the loan amount when you have enough data about the user’s payment and repayment capabilities. This is one of the biggest reasons why loans provided by super apps like Gojek and WeChat have fewer default rates.

Features of a super app

It is often said that an increase in numbers leads to clutter. A super app should be the antithesis of this notion. The app should be made easy for the users to navigate to the right app of their choice and get the job done in simple and straightforward steps. This can only be achieved by garnishing your super app with an intuitive and interactive interface.

Your super app should feature a versatile login mechanism. The user should be able to login either by using their email address or phone number or a combination of both. If the user intends to use services like grocery delivery and a taxi, the phone number should be made mandatory. In addition to these usual login methods, they should also be able to sign up using legacy accounts like Google or Facebook. The sign-up should immediately create a profile for them that will function as a repository of all the orders, the payments, the payment instruments, and the reviews and ratings.

Now that we have talked about the payment instruments, your app should be integrated with a payment service provider that can provide multiple payment options including but not limited to credit cards, debit cards, Internet banking, and wallets. The app should also feature a native wallet that will make it easy to process refunds and make quick payments.

The GPS is the epicenter of the entire on-demand revolution. It has enabled businesses to know where exactly the user who wants a particular service is. The app should not only be granted sufficient permissions to know the location of the user but should also take the assistance of mapping and navigation systems to help the service provider reach the location without any hassle and to keep the user updated on the status of the service they requested.

Some services like massage and grocery delivery can have standardized rates. However, for services like taxi booking, the app should be able to provide an estimate based on parameters like the distance, the traffic, and the demand.

The app should be able to send notifications not only for updates regarding requested service but also on offers and promotions that are active.

The service providers should be provided with a dedicated app that gives them the flexibility to toggle their availability, fix the commercials, verify their identity, and rate the customer based on their behavior. The payment made towards service should quickly be processed to the bank account of the independent service provider.

There should also be an administrator panel to govern everything that happens within the app. The administrator should have the power to control the content including but not limited to offers and promotions, disable users based on their behavior, view the revenue and the commercial elements in a single snapshot, and view analytics and intelligence.

Now that you are aware of Gojek, the market for super apps, the avenues of profitability, and the key features, all that is left for you as an aspiring entrepreneur is to develop an app like Gojek. To build an app like Gojek from scratch would be quite a cumbersome and daunting affair. Alternatively, you can go for a Gojek clone app. A Gojek clone script is a white label solution that is easy to customize and can be made to bear features and an interface of your choice.

You can zero down on the best Gojek clone development company based on factors like their experience, their portfolio, and also the Gojek clone price. They will take care to understand your requirement and customize the app perfectly in line with your business needs, so you can kickstart your multi-services app business in the shortest possible time.

What are the New Features in Angular 9?