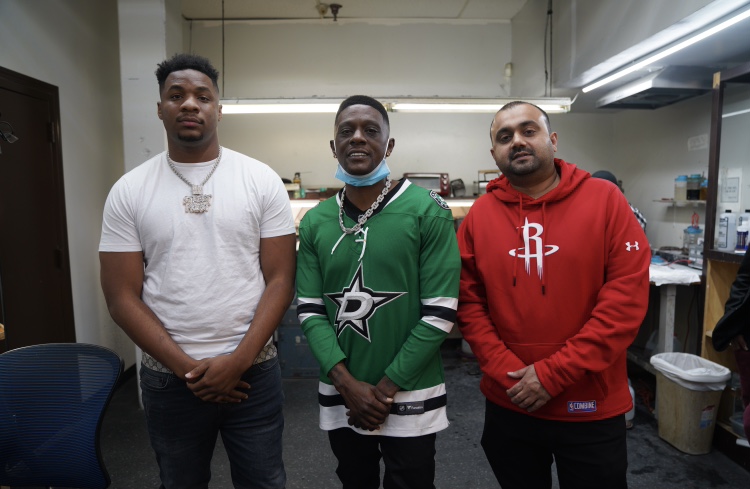 Let’s get a closer look into the life of music artist President Rj.

Owner of Presidential Records, Presidentrj is becoming a successful artist/entrepreneur. His talent and skills have earned him major recognition throughout his career. You can see who he is above in the photo alongside successful recording artist Boosie and one of Houston’s top jewelers Ice man nick. Presidentrj has been working on many new ventures and projects to help catapult his music career and businesses. His last release was a project titled “Street Priest” that features many of his other popular tracks, but his recent single is a certified hit. He has other tracks that are amazing, but there’s just something about this song.

His new single is titled “Crib Tonight”. In the video for “Crib Tonight” he was showcasing his appealing persona and smooth side. This video was shot by TYLERKENDALL. The videographer did an amazing job capturing and setting the vibe for this visual. Presidentrj has a melodic cadence that is quite addicting throughout the song. Alongside Presidentrj was one of the co stars of Bluefaces reality tv show “Blue Girls Club”. Her name is Chrisean Malone. Her and Presidentrj definitely compliment one another in the video. They look very natural. They really do have that early 90s aura with a new age twist. Make sure y’all check out Bluefaces show “Blue Girls Club” now on only fans. This show is a rendition to the once popular show “Bad Girls Club”. Presidentrj and her definitely did an amazing job collaborating on his recent video.

His music has been featured on The Source, MakinItMag, Medium, Drama Like The Dj and many other reputable sources. His music speaks for itself, but his hustle is even louder. Everything he puts out is professional and you can see the time and effort he puts forth when it comes to his career. His record label is just one of many ventures he is pursuing. Coach k and Pierre P are two key figures who had a major influence on his musical career. They were two African American Entrepreneurs that worked towards changing the culture. The same passion that Presidentrj shares. You can check out some of Presidentrjs recent work below. You will not be disappointed. He delivers and his music will continue drawing you in to more of what his catalog has to offer. For all updates make sure you are keeping up with him on his Instagram.

Related Topics:Musical Artist and EntrepreneurPresidentrjPresidentrj:Music Industry Mogul And Label Owner
Up Next