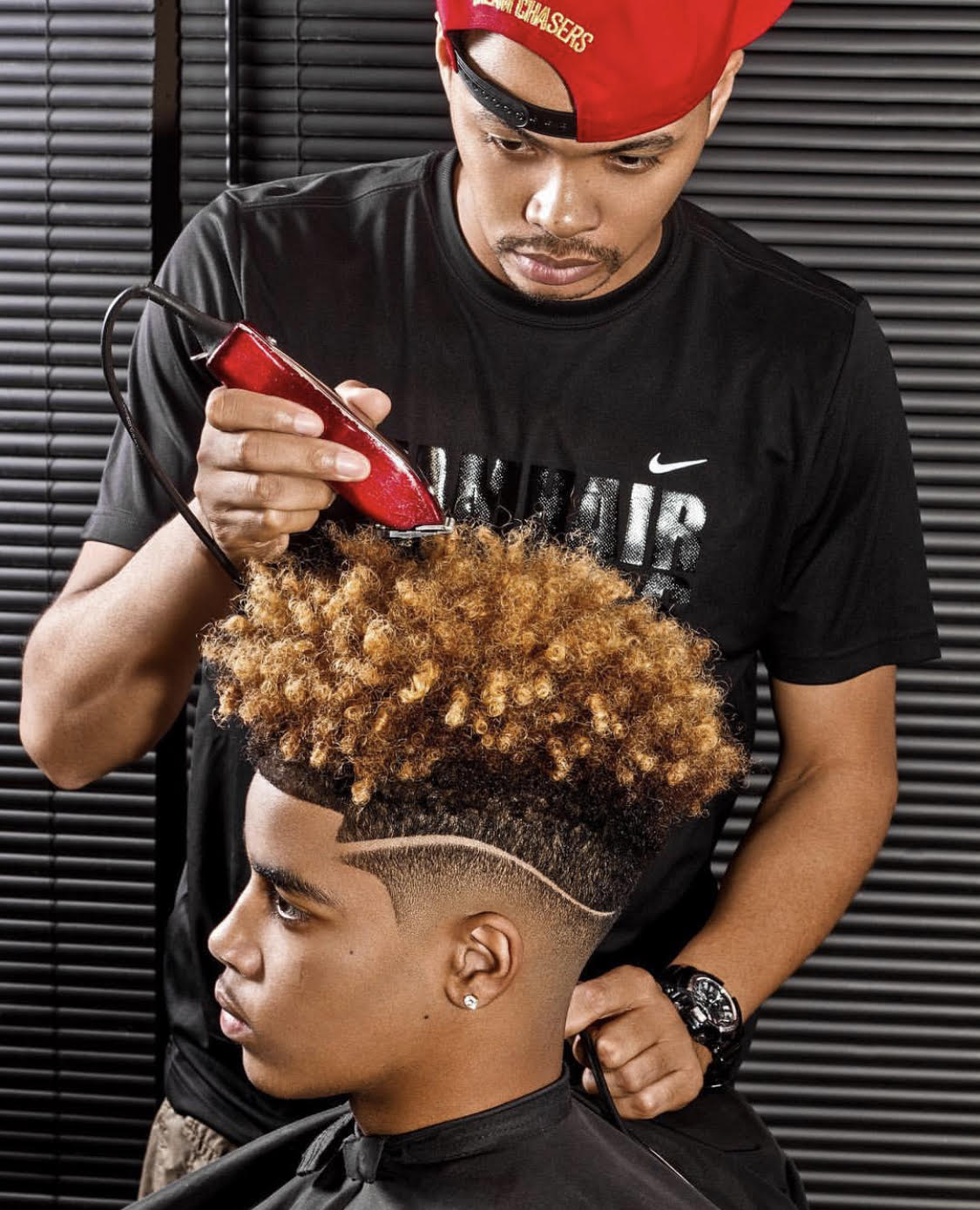 Can you tell us a story about what brought you to this specific career path?

My arrival was very much unorthodox & I never saw it coming. I was arrested when I was younger & that resulted in me being a felon. So the only jobs I could actually get that were paying decent was construction. I worked hard on those jobs but that wasn’t enough because when contracts slowed down, those with felony convictions were let go a week or two after the employees that took off a lot. So I prepared myself for the next let down by enrolling in barber school & cutting hair on the side when I got off from work. About 9 months after finding a new job working as a carpenter’s helper, I was pink slipped again in the same order as before. But I walked away smiling this time because I had built up a small clientele base that could keep me going in the right direction. I worked in two shops before opening my own. The journey wasn’t all peaches & cream but it definitely was very much worth it. I haven’t looked back since.

Recently I had been working with a very influential social media sensation now turned mogul by the name of Supa Cent. Her fiancé and I had known each other for years and I had been cutting his hair for the same amount of time. So he introduced us & I started cutting her son’s hair also. At one point we worked out a promotion deal & her page ended up getting shutdown. Long story short, I just held up to my end of the bargain & stayed down. It didn’t bother me because I understood the situation. She was very transparent about it & she used other channels to keep light shining. Then some time later, she blew & became a millionaire. Shortly after she sent me a text asking for my PayPal address in regards to an upcoming event. I then got an alert for a deposit. Supa had sent me $5,000.00. That was crazyyyy! She later explained that during her times of shutdown that a lot of people closed their doors on her & that she just wanted to show her appreciation. I’m still their barber today but now it’s mostly house calls. They rarely come to the shop.

In retrospect I laugh at this all the time. When I was building the layout for my shop, the parish had just implemented a new law requiring barbershops & salons to have a water fountain installed. My architect and I went back & forth with them about it seeming like forever. I was fiery about until I looked up & noticed 6 months had passed & the only thing standing between my shop being closed & opening was a silly water fountain.

What do you think makes your company stand out? Can you share a story?

Aside from creativity & attention to detail, my story of redemption completely sets me apart. It’s not too often that you hear about a kid go from serving time for selling the wrong product to flying on private jets for a haircut. Nobody really knows how hard that transition was but me. I never thought I’d be where I’m at today, looking back to 10 years ago. Times were so bleak but I held on to what was important to me. And that was to never go back & to totally turn my life around. It’s funny because nobody would know I went through so much because I don’t look or act like it. That’s a constant reminder that I did a great job on reinventing myself. I now own a successful barbershop, service a special clientele & have investments in stock & real estate. That’s a long way from hanging on the corner.

GROWTH & BALANCE! That’s everything to avoiding the burn out. You have to take classes & constantly evolve because this industry flips so much. And if you fall behind in current trends, you’ll find yourself in a place of complacency that’s slowly deteriorating. That’ll make you feel worn & not valued. Another way to avoid the burn out is BALANCE! You need to find that cool place where the scale doesn’t tip heavily in any one direction. You need that family, friends & self time (taking care of body) aside from business. It rejuvenates your spirit & keeps you peaking all across the board. The worst thing is feeling like a machine. I learned this the hard way but I’m definitely trending in that direction now. And it’s paying dividends. My personal life is better & also my business. And that’s b/c of GROWTH & BALANCE!

One of my career goals was to become a celebrity barber. I accomplished that feat but not without some help along the way. And I can’t mention one without the other. My mentor really polished me before I made the transition. He taught me how to conduct myself & what to expect. So my first celebrity client was Keisha Cole’s son. That was a referral from my guy Captain Smash. He wasn’t able to make the trip from Baton Rouge so he gave her manager my number & we went from there. After that it was a ripple effect. A friend of mine was practicing at the gym & Nick Toons of The New Orleans Saints asked him who cut his hair. He passed on my information & I started making house calls for Toons. And that’s how I met client turned family Brandin Cooks of The L.A. Rams. Nick Toons also referred Russell Wilson to me. That was totally cool! I cut his hair for Essence & he shared it on his snap chat. I gained like 4 thousand new followers on Instagram from it. Since then my network has grown through the likes of Marcus Harvey, Ray Johnson, & Maria Barreda. I’ve worked on movie sets, cut hair for Empire, & been called on by platinum R&B artists because of these wonderful people. Grateful to have them in my circle.

My pinnacle of success serves as inspiration to a lot of people. And I tell my story so that it’ll help those overcome the same struggles I did. Crazy thing is, a lot of people pull from it who may going through something totally different. It empowers so many people. And that’s a good thing!

“Failure will never overtake you if your determination to succeed is strong enough”, by Og Mandino is my favorite life quote. Every time I faced in obstacle I would recite this in my head. I remember when I was struggling to open my shop & almost lost it. I went back to this & it helped me overcome. I started working more hours even to the point that I would work on Christmas Day & into the wee hours when I needed to. My determination to succeed absorbed failure every time.

What are your “5 things I wish someone told me before I started my company” and why. Please share a story or example for each.

#1 is that I needed an architect with a live stamp to get my drawings approved and cleared by the parish to move forward with construction. I did just the opposite lost about a month in build out because I didn’t know the latter. #2 allow your staff to blossom in their own time. I used to try & push stylists & barbers who worked in my shop. You can’t do that because you’ll push them away. I saw that with my sister. One day she woke up & decided to be a stylist full time. It was one of my happiest decisions to hear. I saw her potential & knew what she could be. More often than not you should just encourage people & let them develop at their own rate. It’s better that way. #3 Build business credit. I paid cash for everything early on. That hurt me when I wanted to acquire a piece of real estate in my business name because I didn’t have the credit it get approved for funding. I ended up missing out on that opportunity. #4 never take on a subbed out corporate job without signing a contract & or partial payment. I did this for a barber who lives out of state & never got paid. I put together a crew to cut hair for a festival & he stopped answering my calls. I paid the barbers out of my own pocket. I took him to court & won b/c he didn’t show. #5 hire a certified accountant. I got audited so much because I was letting anyone do my taxes & using third party entities to handle payroll. I was messed up really bad. So I hired an accountant & he cleaned everything up & put me on the right track. I can’t express how valuable a good accountant is.

If I could start a movement it would  definitely be prison reform. I’ve seen so many brothers that are super talented & don’t know how to use it; especially after a jail stint.